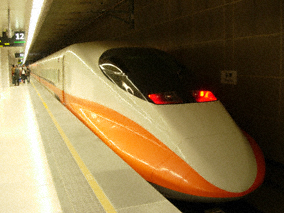 Moving at top speeds of 300 kmh / 186mph & running the length of western Taiwan, the HSR shortens travel time between Taipei & Kaohsiung to as little as 80 minutes on its non-stop route. This as compared to 50 minutes by air, four hours & forty five minutes by regular train or six hours by car 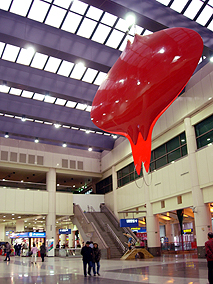 Unlike systems in Europe & other parts of Asia, the organizing philosophy behind the Taiwan's mass transit network is "the High Speed Rail as longitude and area mass transportation systems as latitude", where the HSR provides the north-south corridor and the standard Taiwan Railway & local mass transit systems are oriented to criss cross cities. This unique integration has been termed the 3 Irons or, in Chinese, San-Tieh. While the Taiwan HSR is the shortest high speed route in the world, it is being operated as a high-speed north-south national MRT. The HSR intersects with local MRT systems and regular railroad lines at strategic points as it approaches major population centers in its run up and down the island.

A report given by the Department of Urban Planning at Feng Chia University in August, 2005 explored the influence of the transit system on Taiwan's society & economy. The research 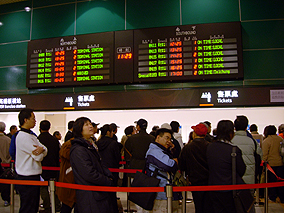 concluded that the introduction of a nationwide railroad in 1908 sparked a spatial re - distribution of population and commerce in Taiwan and forms the basis of the island's transportation story. According to the report, the introduction of Taiwan's National Highway No.1, the Jhongshan Freeway, in 1978 and Taiwan's National Highway No.2, the Formosa Freeway, in 1993 ignited a Significant Spatial Transformation which saw the populations of both Tainan & Taichung rise from 500,000 to 1,000,000. Academics predict a third revolution through the linking of northern, central and southern metropolises via the impact of the Taiwan HSR. 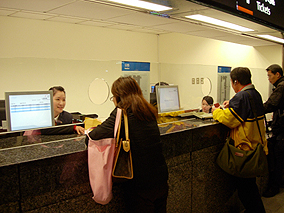 Originally, the plan was to integrate the HSR directly into the existing Taiwan Railway system & stations. Former president Jiang Jing-Guo lobbied the committee to set the HSR's links into local systems at points outside of city centers, suggesting that HSR stations would raise property values for their entire surrounding areas and attract development & population to the regions. 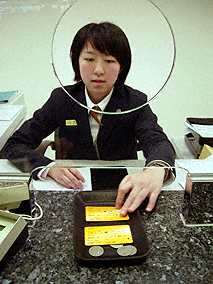 And, indeed, HSR stations have been placed at the periphery of the current city centers for the regions they serve. Under the San-Tieh / 3 Irons system, each locality where the HSR stops is working to build its own MRT systems to integrate the city centers with the HSR. The development of those integrated MRT - HSR stations has been completed at Taipei and Banciao. MRT completion dates for stations further down the line are: Taoyuan 2012, Hisnchu 2010, Taichung 2013, Tainan 2010, " Zuoying-Kaohsiung end of 2007. Additional HSR stations will be opened at Nangang, Miaoli, Changhua and Yunlin by 2010. Among these additional cities only Nangang is also expected to develop an MRT system. Where MRTs have not been completed integrating the cities with HSR stations will be accomplished via existing modes of mass transit. 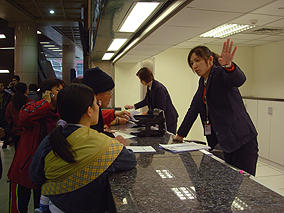 More exciting, with the advent of the HSR and its hyper speeds, Dr. Jiang described the ability to explode the concept of what constitutes a suburban neighborhood. With the full implementation of the HSR it is predicted Taoyuan, Hsinchu, Taichung & perhaps even Chiayi could provide housing alternatives for people employed in Taipei. With travel times so shortened, these regions, formerly at impractical distances, are now related by what HSR planners call "One-day Living Circle" distances. Academics are focusing even keener interest in whether Tainan will become a housing alternative for people working in Kaohsiung. 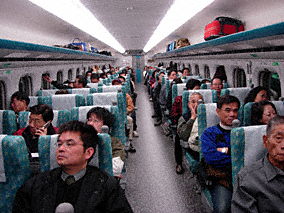 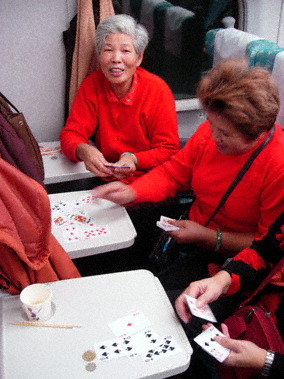 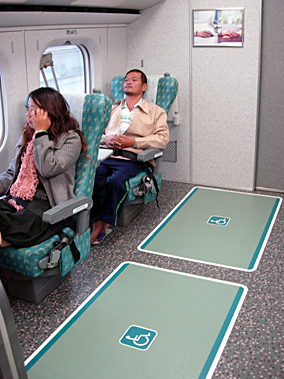 Currently there are 8 HSR stations online  -  Taipei, Banciao, Taoyuan, Hisnchu, Taichung, Chiayi, Tainan, Zuoying-Kaohsiung. In keeping with the 3 Irons program, the HSR is slated to meet up with local MRTs in each of its respective stations.

HSR trains roll out with twelve cars total. Reaching speeds of 300 kph / 186 mph requires more than just your single front - end locomotive. In the case of the HSR, nine of the train's twelve cars provide power. This multi - engine system not only raises maximum speeds, but also allows for greater space in the typically "locomotive" cars. Thus, passengers can even find themselves seated in either of the two bullet - shaped ends of the train.

The HSR system was built by the Taiwan High Speed Rail Corporation, a private corporation under a B.O.T. agreement  -  Build, Operate, Transfer - with the national government. After 35 years of operation, the system will be returned to the government. The total cost of development so far has been NT$480 billion, or around 14.5 billion US$.

Cars for the HSR are based on a design used by Japan's Super Express HSR, modified to fit Taiwan's topography and environment. This unique design is called the Train 700 Taiwan. They are built by in Japan by a 3-company consortium  -  Kawasaki Heavy Industries, Ltd.; Nippon Sharyo Ltd & Hitachi Ltd.

Cars are soundproofed and every train is equipped with handicapped accessible seats and washrooms. Vending machines are found in the 1st, 5th & 11th cars. Every car displays real-time travel information such as time to next destination and current speed.

Business Class seats in general are 1.6 ~ 2.2 times higher than standard fares and offer: 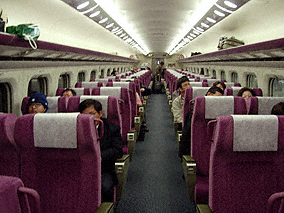 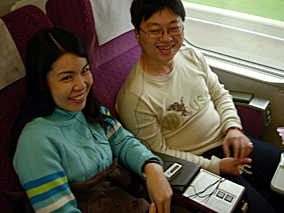 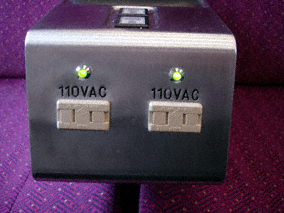 Currently, the HSR has 30 trains and 5 different runs, titled somewhat prosaically - A, B, C, D, E. During the opening period of operation the following routes are online: B, D, E.

The length of the HSR route is 345 km / 214 miles. German and French engineers are piloting the HSR trains, training their Taiwanese counterparts. There are 48 tunnels in total. The longest tunnel is the Eight Diagrams through Baguah Mountain, 7.36 km / 4.6 miles excavated by German engineers over 17 months. Throughout the system there are three tunnels longer than 4 km / 2.5 miles.

Average daily ridership during initial years is predicted to reach 145,000. After the trains initial phase is completed, stations will be open 19 hours a day, from 5:30 am to ~ 12:30am. During the initial phase stations will open from 7am to 10:30pm. 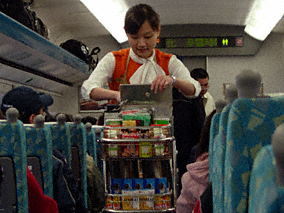 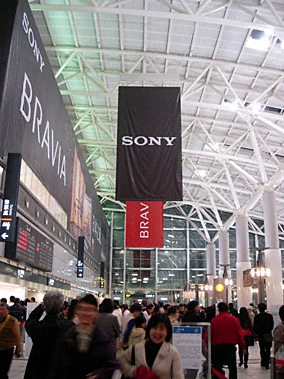 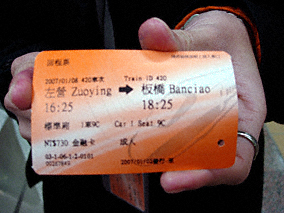 One Room Available in a Spacious 3 Bedroom in Tain... Want to improve my Chinese